Doug Stronach is one of North America’s top pipe band players and educators. He is a World Junior Solo Snare Drum Champion, winner of the Scottish, British and European Championships, as well as top-six World Championship finishes with bands both in Scotland and Canada. He was the leading drummer of the Toronto Police and Peel Regional Police Pipe Bands with multiple Grade 1 North American Drum Corps Awards. He recently retired from competition with the Simon Fraser University Pipe Band from Vancouver, BC.

He has taught and played throughout the world including Canada, USA, South America, South Africa, Zimbabwe, New Zealand, France, Germany, Sicily and the UK and has authored five books on Pipe Band Drumming including North America’s best-selling beginner tutor book. 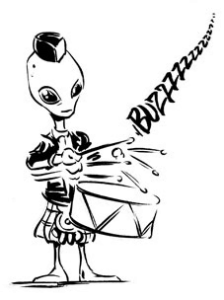 The M&G Attack Model Bass Sticks are in stock. The shaft is made from 100% pure maple and is similar in look and feel to that of a snare stick. This stick’s head is slightly heavier than most others on the market, with the weight and feel contributing to its superior attack and warm tone. Available in white or black and a variety of colours.